What's going on in this previously hot sector?

You know, Special Purpose Acquisition Companies? The IPO 2.0? SPACs had a hot run there, for a little while. For those who aren't familiar with SPACs, allow me to give a way-too-brief breakdown of how SPACs differ from regular IPOs.

Typically when a company wants to go public, they file for an IPO. That process looks something like this:

Private company wants to go public. Private company contacts banks to underwrite their IPO. Private company executives go on a road show to drum up investor interest for their IPO, so institutions will subscribe to the IPO shares. After gauging investor interest and reviewing comps in the broader market, the underwriting bank(s) will advise the company's management on how many shares to issue at what price to raise $X money. If a company wants to raise $100M at a $1B valuation, for example, they might issue 2M shares at $50 per share.

Then the company goes public, those new shares trade on secondary markets, the company raises $100M, and its stock price is determined by public market investors moving forward.

These SPACs raise $100M, $250M, or any other arbitrary amount of money from investors, lock that money in a trust account, then go deal hunting.

Say a private company wants to go public through a SPAC instead of a traditional IPO. Instead of going on an IPO roadshow to raise money from investors, the company would take the SPAC's money in exchange for X% of the company. If a SPAC has $100M, and they agree to invest the $100M in exchange for 10% of company XYZ, company XYZ would be worth $1B when the deal closes.

A smoother transaction, and all of the cash comes from one source. Cool.

SPACs also have a few other unique features:

First, SPACs have a timeline, typically two years, to close a deal. If they fail to close a deal, investors get their money back, and the SPAC sponsors go home with nothing.

SPACs typically go public at $10 per share, and they price their deals at $10 per share. Because the money is placed in a trust account, SPAC investors can redeem their shares for $10 + interest before the merger closes. This redemption feature gives SPACs a defined floor pre-merger.

But the biggest benefit that SPACs provide to companies? Companies going public through SPACs can give multi-year financial projections that aren't allowed in traditional IPOs. Take electric vehicle startup Fisker, for example: 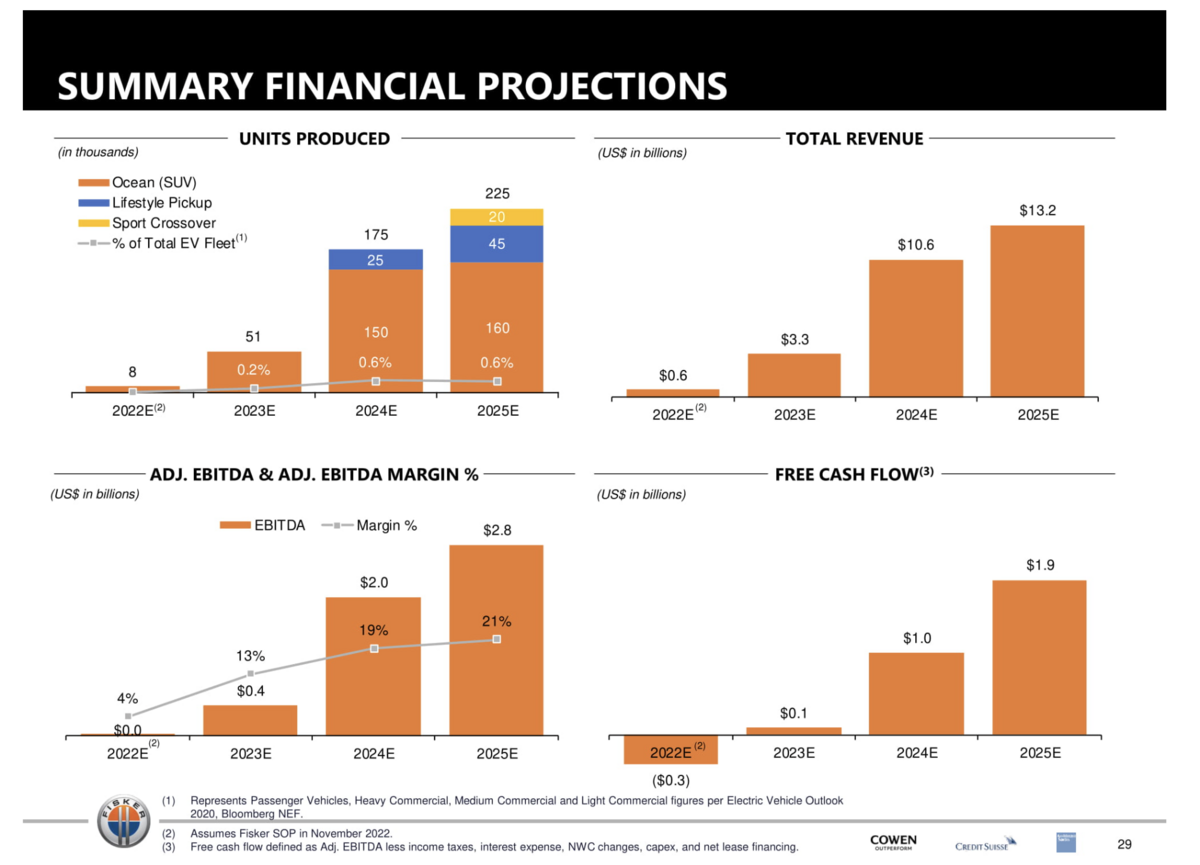 In the traditional IPO process, a company with $0 in revenue could never forecast $13.2B in revenue five years out. In SPAC-land, this was a conservative estimation. We saw all sorts of projections from all sorts of companies. $0 to $10B revenue projections, trillion-dollar addressable markets. When companies can forecast everything, they will forecast anything.

Of course, all of these estimates were totally realistic, and not-at-all exaggerated.

There are some obvious benefits for companies that decide to use a SPAC instead of the regular IPO, but why would a sponsor raise a SPAC in the first place?

The financial incentives are quite lucrative! While banks get paid for underwriting IPOs, they have nothing on SPAC sponsors. There is a reason that Chamath Palihapitiya was so SPAC-happy over the last few years. Check out this section from IPOA's prospectus:

IPOA was the SPAC that took Virgin Galactic public.

IPOA's sponsor (read: Chamath) would receive 17.25M shares of IPOA stock in exchange for his $25,000 investment in the company. Not bad!

So we have an incentive structure where companies can give unrealistic, ridiculous revenue projections, and SPAC sponsors are given millions of "free" shares for closing deals with companies that give unrealistic, ridiculous projections. And on top of that, SPACs went ballistic from ~April 2020 to February 2021. Investors were literally bidding these SPACs 200% higher than their deal prices before the mergers even closed. A risk-free 200% gain for those who invested at $10 per share.

So everyone launched a SPAC. Former US House Speaker Paul Ryan has a SPAC. Shaq has a SPAC (though his former SPAC is down 88% post-merger.) Donald Trump's company (?) is probably (?) going public through a SPAC merger. JAY-Z has a SPAC. 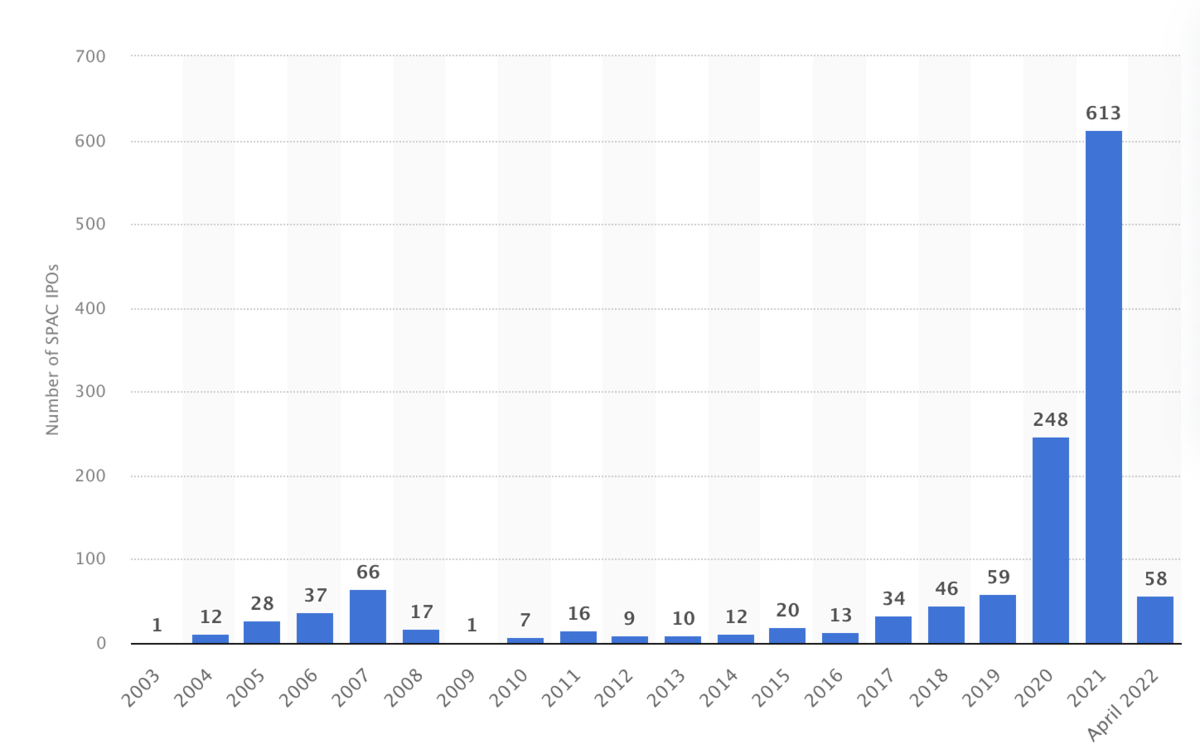 It makes sense. Private companies that would otherwise warrant 0 interest from investors on an IPO roadshow (because how many investors are going to throw money at a company with zero revenue looking for a $1B+ valuation?) could now raise $200M from SPACs.

The sponsors of these SPACs could make millions and millions of dollars just for taking a company public. Even if the shares crater as soon as the deal closes, who cares? They bought 10M sponsor shares for $25,000. You know how much 10M shares are worth if the stock crashes to $1?

But as we hit mid-2021, two things happened. First, there were too many new SPACs hitting the market and not enough money to go around. Second, companies that merged with SPACs in 2020 were now having earnings calls. And *surprise, surprise* these companies, one after another, missed their projections from just one year earlier.

Consider me shocked, and I mean shocked, that industry-wide 200% revenue growth wasn't realistic.

Less money to go around, more and more SPACs hitting the market, and broken trust as every single SPAC missed their forecasts is a recipe for disaster.

Fast forward to mid-2022, and there are still 610 SPACs looking for targets. Many of these SPACs are quickly approaching their deadlines. If a SPAC fails to close a deal, its sponsors lose their $25,000 plus millions in free shares.

So these sponsors are increasingly incentivized to bring worse and worse companies to market just to close a deal with something.

The thing is, SPAC shareholders have to vote to approve these transactions. If you can simply redeem your shares for $10 cash, why would you want to approve a deal that doesn't benefit you?

Technically, shareholders can vote to approve deals while also redeeming their cash. This leaves a weird situation where a $500M SPAC has 96% redemptions, leaving only a few million in cash for the newly merged company. Mass redemptions create low-float stocks, which are subject to both short squeezes and rapid price drops.

SPACs were a microcosm of the broader "everyone is getting ridiculously rich" phenomenon that we saw in several market sectors over the last two years.

But as we have seen time and time again, when everyone is getting ridiculously rich, everyone takes on ridiculously high risks. And when momentum shifts... risk happens fast.

Catch the latest episode of our Big Swinging Decks podcast on Spotify, Apple, and YouTube 🤝