Does Elon Musk Have Paper Hands?

Elon Musk put $21 billion of Tesla stock in the hands of his Twitter following, and the masses spoke. Now what? 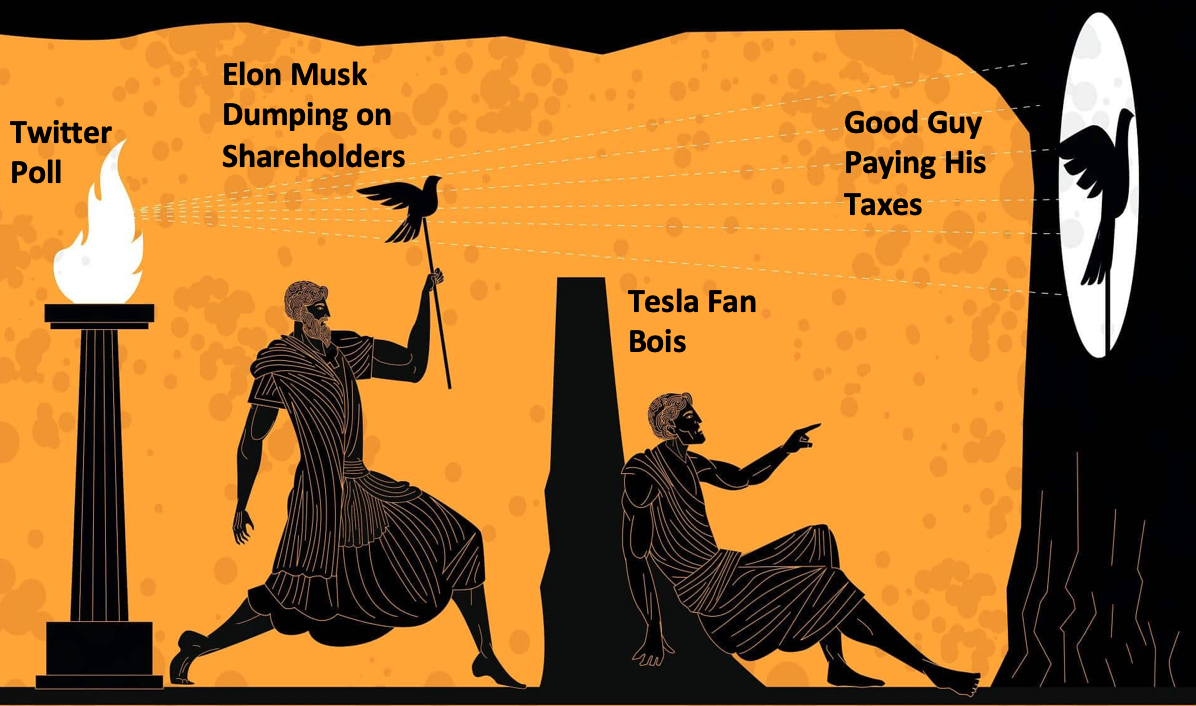 Over the last several months, there has been a ton of chatter in Washington D.C. about a potential unrealized capital gains tax on billionaires.

Musk has seen his net worth leap from $23 billion in April 2020 to more than $300 billion now, largely due to Tesla's ridiculous stock melt up.

With the markets closed this past Saturday, Elon decided it might be time to offload part of his stake. Musk launched a Twitter poll asking his followers whether or not he should sell 10% of his Tesla stock.

Note that if you voted on this poll, you can now include "advised CEO on multi-billion dollar transaction" to your resume.

Much is made lately of unrealized gains being a means of tax avoidance, so I propose selling 10% of my Tesla stock.

Do you support this?

Musk followed up this poll by stating that he "will abide by the results of this poll, whichever way it goes". Tesla fanbois hammered "No", but curiosity and chaos won. 3.5 million votes later, 58% said that the billionaire should sell some stock. Now what?

How Much Money is $21 Billion?

Musk owns more than $200 billion is Tesla stock, with 10% of his holding worth around $21 billion. To put it in perspective, this $21 billion is worth more than:

@DrEliDavid If WFP can describe on this Twitter thread exactly how $6B will solve world hunger, I will sell Tesla stock right now and do it.

@elonmusk@DrEliDavid .@elonmusk! Headline not accurate. $6B will not solve world hunger, but it WILL prevent geopolitical instability, mass migration and save 42 million people on the brink of starvation. An unprecedented crisis and a perfect storm due to Covid/conflict/climate crises.

This is easily the most expensive Twitter poll in history.

Why the Paper Hands?

@RonWyden Why does ur pp look like u just came?

The Top of All EV Bubble Tops?

Musk himself once said, "Fate loves irony." Is there anything more ironic than the CEO of the world's biggest automaker letting a Twitter poll determine the fate of $21 billion in stock, and the bubble implodes afterwards?

Musk and co, against all odds, built an incredible company. They should reap the fruits of their labor. But what about the "Tesla 2.0s" that are trying to ride the OG's coattails? Let's look at valuations and cars sold: 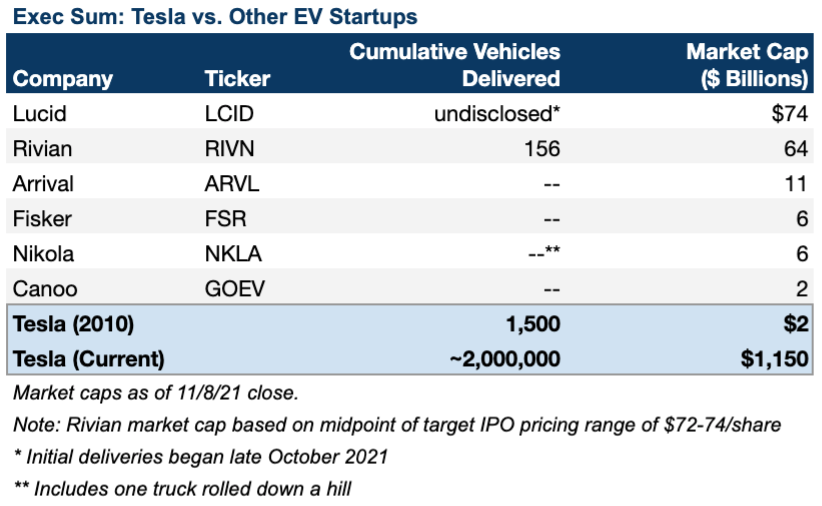 A handful of cars sold. One truck pushed down a hill. $163 billion in aggregate market capitalization.

Keep in mind that when Tesla IPO'd in 2010, the company 1) already had sales and 2) IPO'd at $1.7B. Analysts were calling it expensive at the time.

Now let's check out some other automakers:

I imagine that once their EV lineups roll out, Ford and company will shed their "boomer discount" and eventually trade at similar multiples to the startup gang. Why shouldn't they? They all sell cars that run on batteries.

What seems more likely: Ford to a trillion or Lucid to a billion?

When everyone is selling EVs, you can't expect the startups to continue trading at these premiums, right?

But only one company has both of those, and it isn't Fisker.

The wunderkind CEO knows the EV market better than anyone else, and he can definitely assess "fair value" of these companies better than most. Maybeee Musk thinks the sector is just a bit (read: insanely) pricy, and now is a good time to take some chips off. Congress certainly makes a convenient scapegoat.

The Redditors of Wallstreetbets refer to risky option contracts (typically short-term) as "FDs". Musk has 22.8 million Tesla stock options with a strike price of $6.24 expiring in August. FDs indeed. Musk will report income of ~$26 billion when he exercises these options, assuming today's closing stock price. With a 50% tax bill, he'll owe approximately $13 billion in taxes.

If taxes go up next year, he'll owe more money. Even if they don't increase next year, he'll still have to pay Uncle Sam. Selling some stock at all-time highs to pay a tax bill on billions in options isn't a bad move.

Will He Actually Do It?

That's the (21) billion dollar question. The poll spoke, and Musk stated that he was prepared for either result. We need to check historical precedent. Two and a half years ago, Musk was one of four candidates in a poll for the CEO of Dogecoin. Musk won this vote.

We have listened to your concerns. We have decided that Dogecoin does need a CEO. Someone who can lead us into the future while maintaining the core values of what we are.

Below are the candidates, vote wisely.

So yeah, I imagine that Musk will probably honor the results of this poll. What does that mean for Tesla shareholders?

It means the stock price will go down.

What happens when Tesla's stock goes down?

I fully expect Tesla to explode through Dr. Parik Patel's price target by the end of the week.

Good morning everyone. Since $TSLA hit my previous price target I spent last night doing some more analysis. I am proud to say I am very bullish. My revised price target is $1,264. I calculated this by taking the current share price and adding the $600 stimulus check. See below:

I guess we're going to wait for Musk to tweet a GIF of a grocery boy holding his bags, or some other meme to represent him dumping his bags on investors. And then the stock will double again, because that's what happens every time Musk does something seemingly detrimental to his own company.